Billie Eilish Pirate Baird O’Connell, or as she’s more commonly known, Billie Eilish, has become a staple name in households everywhere. She became famous seemingly overnight with her hit song “Ocean Eyes” in 2016 and has since appeared on Ellen, Jimmy Fallon, Jimmy Kimmel, SNL, The Howard Stern Show, the AMAs, the Grammys, and more. With 5 Grammy wins at the age of 18, Eilish’s music career is already impressive.

Eilish’s success can be contributed to both her vocals and her brother Phineas O’Connell’s songwriting abilities. In my opinion any successful and lasting artist has a distinct sound, look, and persona. Eilish is anything but typical with her hauntingly beautiful voice, and whose vocal range is, as Phineas describes, “sort of between a whisper and a hum.” I think her voice is haunting and mesmerizing in a Siren-like way. Her soft sound contrasts and works nicely with the track sounds of “bass; kick drums; and low, clocky snares” Phineas explains.

I’m excited to see how Billie’s sound evolves, particularly as she gets older. In a Vanity Fair interview, taken every year for 3 years, 2019 Billie commented on how she sounded like “a baby” in 2017.

Eilish’s sound is not the only interesting thing about her; her look is distinct and original, compared to the typical female music artist. She doesn’t wear revealing clothes, but wears overly baggy and oversized clothes to prevent people from knowing everything about her and project their opinions on her body. As a woman, I find this defiant stance pretty badass. I think music should be about the sound and person, not how pretty or attractive they are.

Eilish’s look, baggy colorful sweatshirts and pants, rings, chains, dyed hair, and sneakers makes her stand out for all the right reasons. An artist I would compare her to is Lady Gaga; they both created new looks that make them unforgettable, in addition to their wonderful voices.

Billie Eilish is new and exciting. She’s got an angsty and cool ‘I don’t give an eff vibe’. Eilish’s image features being ‘the bad guy’ that seduces your dad and makes your mom sad. While this is not entirely true, according to Eilish, she definitely sports a goth, anti-authority aesthetic that we as a world need. She’s the necessary antihero of the pop world.

I love and respect Billie Eilish because of her music and, more importantly, because of her emphasis on mental health in her album “WHEN WE ALL FALL ASLEEP, WHERE DO WE GO?” released in 2018. She has been pretty open about her struggles with mental health, and discussed her experience with depression and suicidal thoughts in an interview with CBS This Morning’s co-host Gayle King.

Eilish explained how her depression and anxiety affected her deeply for three years, on top of her already existing clinical depression. One song in particular, “Bury a Friend” features lines that highlight her sadness like “Why don’t you run from me?…Why aren’t you scared of me? Why do you care for me?”

Other lines in the song shed light on her suicidal thoughts “Like I wanna drown, like I wanna end me…Honestly, I thought that I would be dead by now.” In her interview with Gayle King, Billie told her how on tour in Berlin she debated jumping out the window, ending her life. She said she didn’t because of her brother and family. I admire Eilish’s honesty and vulnerability in the interview, her music, and in general. I think mental health is a topic that people, and especially teenagers, can relate to and create a sense of community within.

Hopefully, by talking about our struggles more, we can create an environment in which those that are struggling are more likely to speak out or get help. Who knows, maybe someone struggling with depression or suicidal thoughts will hear Billie Eilish sing about it, and think “Hey, I’m not alone in feeling this way” and isn’t that the goal of art? 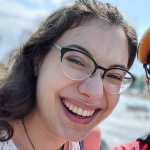 Hello! Francesca is a senior at Canisius College majoring in English, Creative Writing, and Psychology. She is currently the Opinion Editor of The Griffin Newspaper. She loves cats, poetry, and iced coffees. You can usually find her at Starbucks or watching Golden Girls with her grandma.